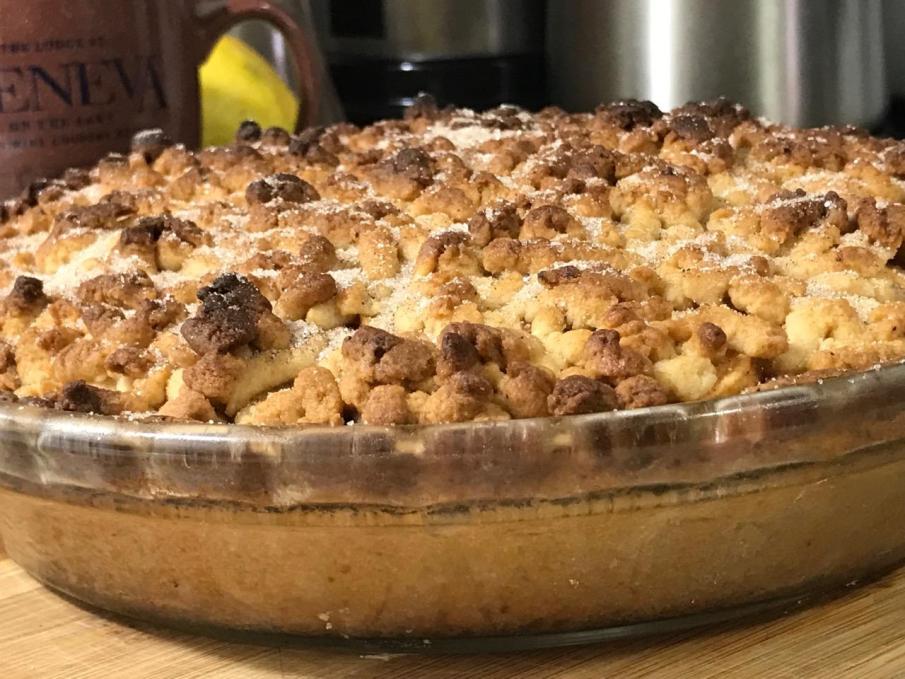 Apple, rum, walnut, raisin filling baked in a sweet yellow pea dough infused with rum, topped with a spaetzle-type crust. Not your run of the mill apple pie!

6-7 lg. red apples, peeled, cut into quarters from top to bottom – core each segment, then thinly slice each segment 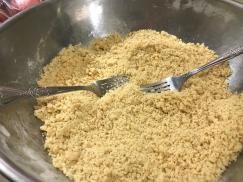 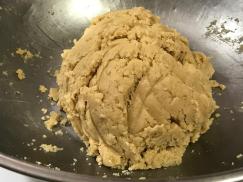 Take 2 forks (large or small) make crisscross movements through ingredients till flour, sugar and fats are evenly dispersed and form equal size crumbs. Make sure the crumbs are equal in size, since once you add the liquid you won’t be able to handle the dough much.

Add 1/4 cup of the dark rum, again crisscrossing with forks to incorporate – no spoon needed.

I needed a little more moisture to get the dough to form a ball, so I added 2 more Tablespoons, one at a time, crisscrossing the dough with forks till the dough formed a ball.

Liberally flour a large clean surface on the counter top, then lift dough ball onto center of it. Knead it just a little bit till smooth, then cut dough in half and set one half aside for topping.

Take the dough on counter and form it into a round, flat disk pushing up and smoothing edges till disk is about 1 inch high. Flatten a little more, evenly, then lift and place in center of 9 inch pie plate. If it breaks as you lift it, then return to counter and reshape into a tighter disk so it doesn’t break when you lift it. I tried a rolling pin and it didn’t work. Just disk-it, and place in pie plate.

Now push and smooth dough onto pie plate from center out, evenly, to the top of the pie plate. It takes a little while, so take your time – you’re molding a masterpiece, a once in a lifetime project. When it tears, because you’re being too rough or overly cautious, mend the break by pushing and smoothing – like you’re working a ball of soft clay. Make it evenly thick throughout and smooth. Set aside.

Place apple raisin walnut mixture into pie crust in pie plate. Even out the ingredients as much as possible, while keeping them inside the plate – no willy-nilly dump it and run type of placement. Think masterpiece! 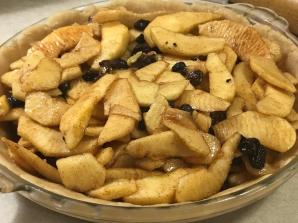 Now we spaetzle the top crust >

You need a hand-grater/shredder for this. Take the second half of the dough that was formed into a ball and cut off a piece that’s large enough to rub over the largest holes of the grater.

Push dough firmly over the holes as you slowly swipe the grater with the dough under the palm and ball of your hand, while little spaetzel-like pieces fall from the underside of the grater.

Repeat with the rest of the dough. The dough doesn’t have to maintain its shape as you push it through the holes. All you need is for it to get through to the other side. You’ll have a bunch of little droppings on the counter. Handle them carefully and lightly. You don’t want them to mush up as you transfer them.

Now lightly lift and place as evenly as possible over the entire top of the pie, handling them as little as possible. Do not pat or squeeze or otherwise mat the spaetzle.

Lay a square of aluminum foil flatly over the top, covering the pie without crimping the foil.

Bake 30 minutes. Remove foil, reduce heat to 350 and bake 20 minutes longer or till the spaetzel crust browns nicely and liquid bubbles up from edges. Watch closely towards the end, since the crumble crust can burn quickly.

Remove from oven and cool on rack. If desired sprinkle with granulated sugar.

Keep a watch on your oven, since everybody’s is a little different and your pie could bake up quicker or slower than mine.

We go 400 degrees for the first half of baking time, since we have a bottom crust and want to be sure it browns nicely. Then we reduce the heat for the second part of baking.

RE: PREPARATION TIMES for recipes

It takes a lot longer to develop a recipe than it does to replicate a recipe.

For that reason the prep times are not given.

To estimate the time for each procedure after the fact would not be accurate enough for my tastes.

The number of ingredients aren’t necessarily an indicator of preparation time.

YOU’RE SAFE WITH ME

I’m not going to put a noose around your neck, hang you from the pipe and gut you.

I’M A CHEF WITH A CONSCIENCE.

There is no slaughter in My Animal-Free Kitchen™

YOU’RE SAFE WITH ME.

Soon humans worldwide will no longer celebrate their holidays with a slaughtered animal on the plate.

Gorging themselves with the flesh and blood of other creatures will repulse the most hardened, and true joy will return to a planet that was designed to be a Garden of Peace & Beauty.

Humans designated the apple as the forbidden fruit, rather than the animal which created long term chaos and suffering.

A correction is occurring as I write. Notice plants are not being infected with the global spreading of the LETHAL corona-covid VIRUS – only human animals exposed to the animals they slaughter.

Her Five Star Recipes are shooting for 6,7,8,9,10… She puts them up against any animal recipe in the world, throughout history, hands down, her animal-free recipes reign.